Published on Friday 21 December 2012 09:00
PENDLE councillors have agreed to formal twinning links being made with the Palestinian town of Beit Leed.
Labour and Liberal Democrat members agreed to a motion backing the move at the full council meeting, but Conservative councillors argued that the Israel-Palestine issue was one the council should not involve itself in.
In a debate which lasted for more than half an hour, watched by members of the Pendle for Palestine Twinning Group in the public gallery, Coun. Mohammed Iqbal praised the actions of two young Pendle people who had increased public awareness of the situation by organising a rally in Nelson last month and congratulated Pendle MP Andrew Stephenson for his efforts to secure a peace deal between Israel and Palestine through Parliament.
As well as calling for the signing of twinning links, his motion called on the council to welcome the affording of “observer status” to Palestine by the UN and condemn Israeli government plans to build illegal settlements on occupied Palestinian land.
Conservative Coun. Graham Waugh said it was not appropriate to waste time discussing the matter when there were local problems which needed councillors’ attention.
And the BNP’s Coun. Brian Parker said: “I am not taking sides but we could twin with a settlement in Israel. We should stay well out of this. We should avoid Palestine because of its links with terrorist groups” – a comment which provoked calls of “Fascist” from the public gallery and drew a rebuke later from council leader Coun. Joe Cooney.
Other speakers from both sides of the argument made contributions before Coun. Iqbal, in summing up, thanked all councillors “bar one” for their “helpful” contributions to the debate.
A meeting will be held in the near future to consider the twinning arrangements.
PPTG spokesman Richard MacSween thanked councillors afterwards for getting behind the proposal.
“People in Pendle will be able to show their support for a town in a country which has had a hard time of it.” he said. 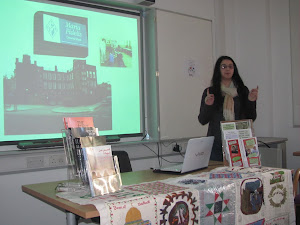 Here's a picture of Noor, one of the Palestinian volunteers who will be coming to Pendle in a early February ... She is available to talk to community and college groups etc - contact Pendle for Palestine to be in touch with her.